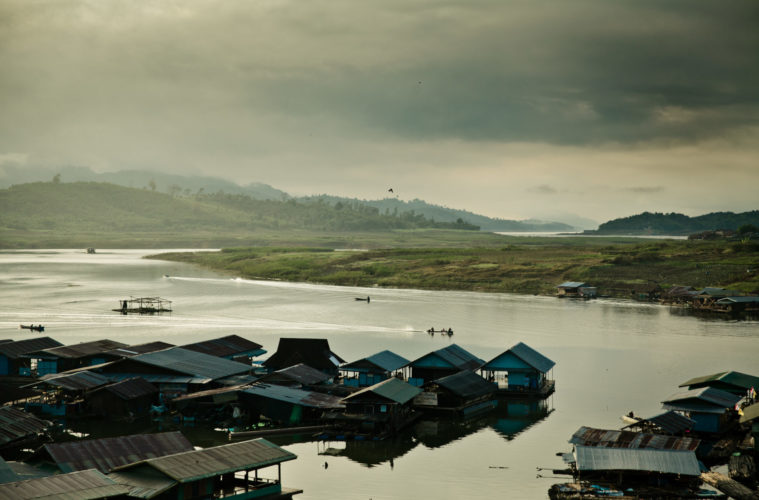 Migrant communities along the Thai-Myanmar border

Children of the Forest (CoF) works with at-risk stateless migrant children in an isolated area of Thailand’s border with Myanmar around Sangkhalburi, far from the shopping malls of Bangkok or southern tourist beaches. In this border zone with access further into Thailand restricted by police and military checkpoints, poor and stateless migrant communities, originally from Myanmar, remain hidden from view just off the main roads and in the surrounding forests.[i] The needs of these migrant communities, especially the children, are great and that remains the focus of the work of CoF. This update outlines recent developments on both sides of the border that impact on the lives of migrant communities and migrant children that CoF work with.

In Myanmar, with the 2015 election of the Aung San Su Kyi-led civilian NLD government, hopes grew for an end to armed conflict and improved conditions and return of displaced people in ethnic border regions. However, the civilian government remains subject to the restrictions of the military-drafted 2008 constitution and has no control over the military which retains control of key government ministries of defense, home and border affairs.[ii]

Consequently, in 2018, continued militarisation, tension and sporadic clashes have occurred in recent months in Karen and Mon areas adjacent to the Thai-Myanmar border. This has included clashes between ethnic armed groups and the Myanmar military,[iii] and between competing ethnic armed groups,[iv] resulting in further displacement of people and disruption to livelihoods.[v] The wider peace process in Myanmar itself has also faltered with the Karen National Union, the largest ethnic armed group adjacent to the Thai-Myanmar border, temporarily suspending its participation in the peace process in October 2018.[vi] These ongoing political and military factors continued to discourage any large–scale return of refugees or migrants back to Karen and Mon areas in Myanmar.

Another driver of continued displacement in Myanmar has been development projects such as road building, hydropower dams, mining, or land grabbing for agribusiness like rubber or palm oil plantations, forcing more people to move internally or even across borders to seek new work.[vii]

The Myanmar government has reduced funding to ethnic minority schools in Mon state.[viii] This has further underpinned the importance for Mon and Karen children on the Thai side of the border to access appropriate education that includes recognition of their mother-tongue languages and cultures such as provided at COF’s free school in Sangkhlaburi.

Severe flooding during the rainy season has also affected communities on both sides of the border. In July and August 2018, thousands were displaced and crops devastated by floods in Karen and Mon states.[ix] These floods also affected the Thai side of the border damaging crops and infrastructure, including around Sangkhlaburi[x] and at CoF.

Developments in Thailand and along the Thai-Myanmar border

In Thailand the situation for the more than two million migrant workers from Myanmar remains very precarious. [xi] Since July 2018, further government crackdowns on undocumented Myanmar migrant workers have resulted in arrests, fines and deportations.[xii] Registration as legally recognized migrant workers in Thailand presents many difficulties. To gain formal permission to work in Thailand, migrants first deal with Myanmar government bureaucracy to obtain a labour ID card (often difficult or impossible for Muslim migrants from Myanmar), and then in Thailand, further complex processes, fees, language barriers, and often, exploitation by corrupt officials, employers and work brokers (HRW).[xiii] Consequently, many migrant workers remain undocumented and subject to exploitation and many other risks.

Another recent development around the Sangkhalburi area of the border has been increased development and infrastructure catering mostly to Thai tourists coming to the area. While this has some benefits for local businesses and some migrant employed in them, it has also presented problems due to new projects such as building of hotels that have resulted in migrant communities being displaced from areas for new construction projects.

There have also been increased levels of drug production and drug use especially among youth. [xiv] Methamphetamine pills (locally known as ‘Yaba’) have been produced and smuggled across the border into the Sangkhlaburi area. COF has witnessed the effects of these drugs on migrant communities in this area and works to keep children and youth safe in this environment.

Organisations working with refugee and migrant communities along the Thai-Myanmar border, including COF, have faced declining support from donors in recent years.[xv] The attention of international donors has often shifted inside Myanmar, but the issues facing migrant children living in the border zone that COF work with are as pressing. COF has been proactive in seeking new and innovative ways to support its education, health and outreach programs as well as restructuring its existing programs to the new funding realities.

As ever, all of us here at Children of the Forest are extremely grateful to all our donors and supporters as we move forward to face the coming challenges in 2019 and beyond. Your contributions enable many migrant children to have access to education, healthcare and opportunities for brighter futures beyond the border zone.

For UK,Europe & Worldwide Donations To Children of the Forest